Posted at 05:48h in Uncategorized by Orodata 0 Comments
0 Likes As the world deals with the refugee crisis due to the war in Syria and parts of the Middle East, Nigeria is dealing with its own refugee crises. The bane that is Boko Haram (BH) has led to widespread displacement of people in the North East. Homes and whole communities have been destroyed, and survivors have had to trudge to camps set up for them by state and federal governments. Sadly, ‘IDPs (Internally Displaced Persons)’ has become a household acronym in Nigeria.

Several individuals, organizations, multinational donors and governments continue to donate to these camps. But everyone will tell you that conditions are dismal! And it’s not getting better. Even a quick Google search of ‘Nigeria’s IDP camps 2016’ is reflective of the all round bad news – ‘Malnutrition deaths in IDP camps’, ‘Nigerian officials grow rich on the hunger of the poor’, ‘IDPs protest over poor feeding in camps’, ‘Rotten under-bellies of North-East IDP camps’, stories of child trafficking, and many more. The stories are bleak! But what can we do about this!

Entrepreneur, Citizen Data Scientist and Founding Partner of Orodata Nigeria, Blaise Aboh, knows that the first step in tackling this is to know what is on-ground in these IDP camps. This led him to develop the IDPs Tracker. The whole point is to track, monitor and analyze data about these IDPs and IDP camps and represent them in easy to interpret infographics (click below) so that people can use this information to make better decisions for the camps. 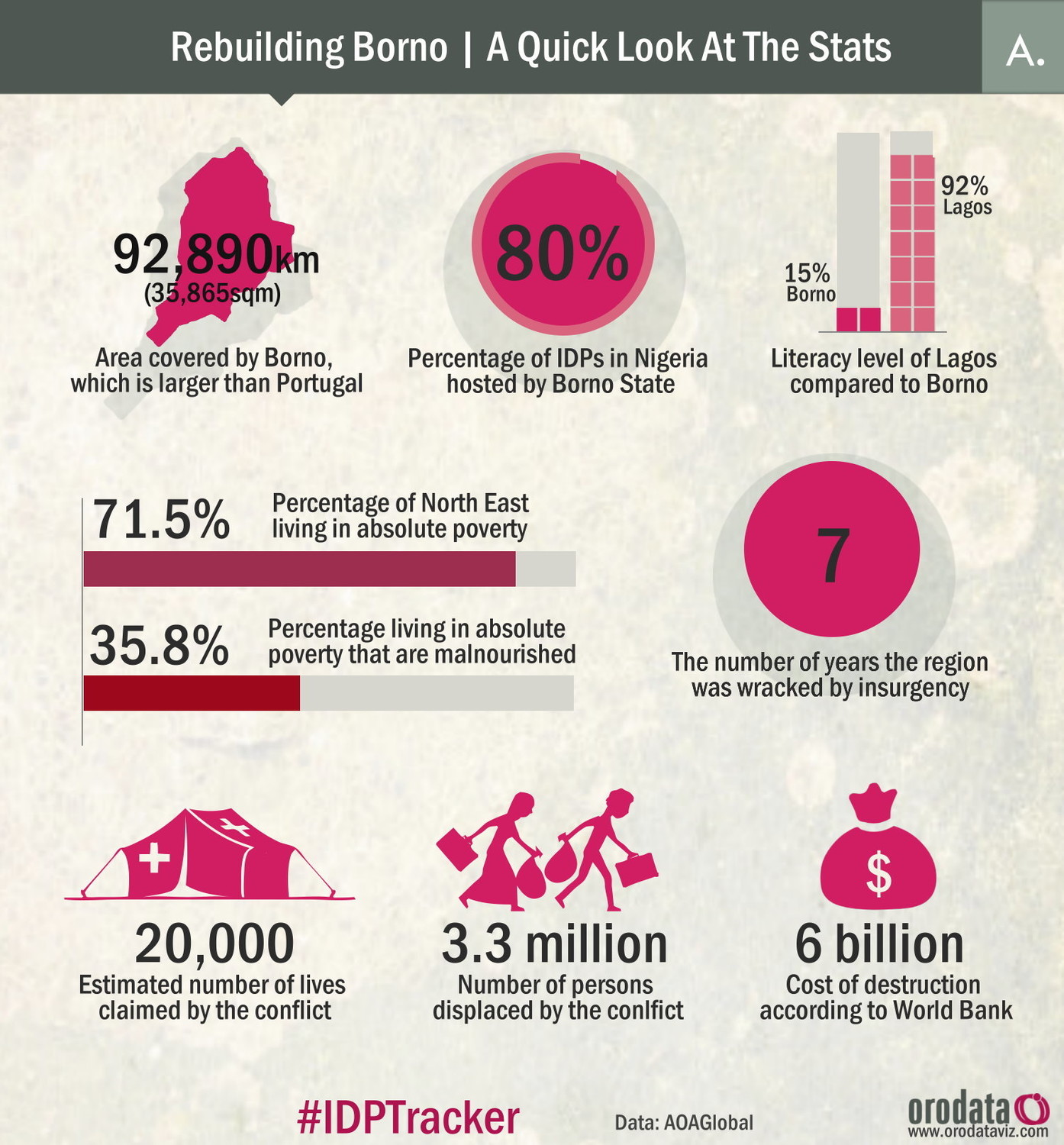 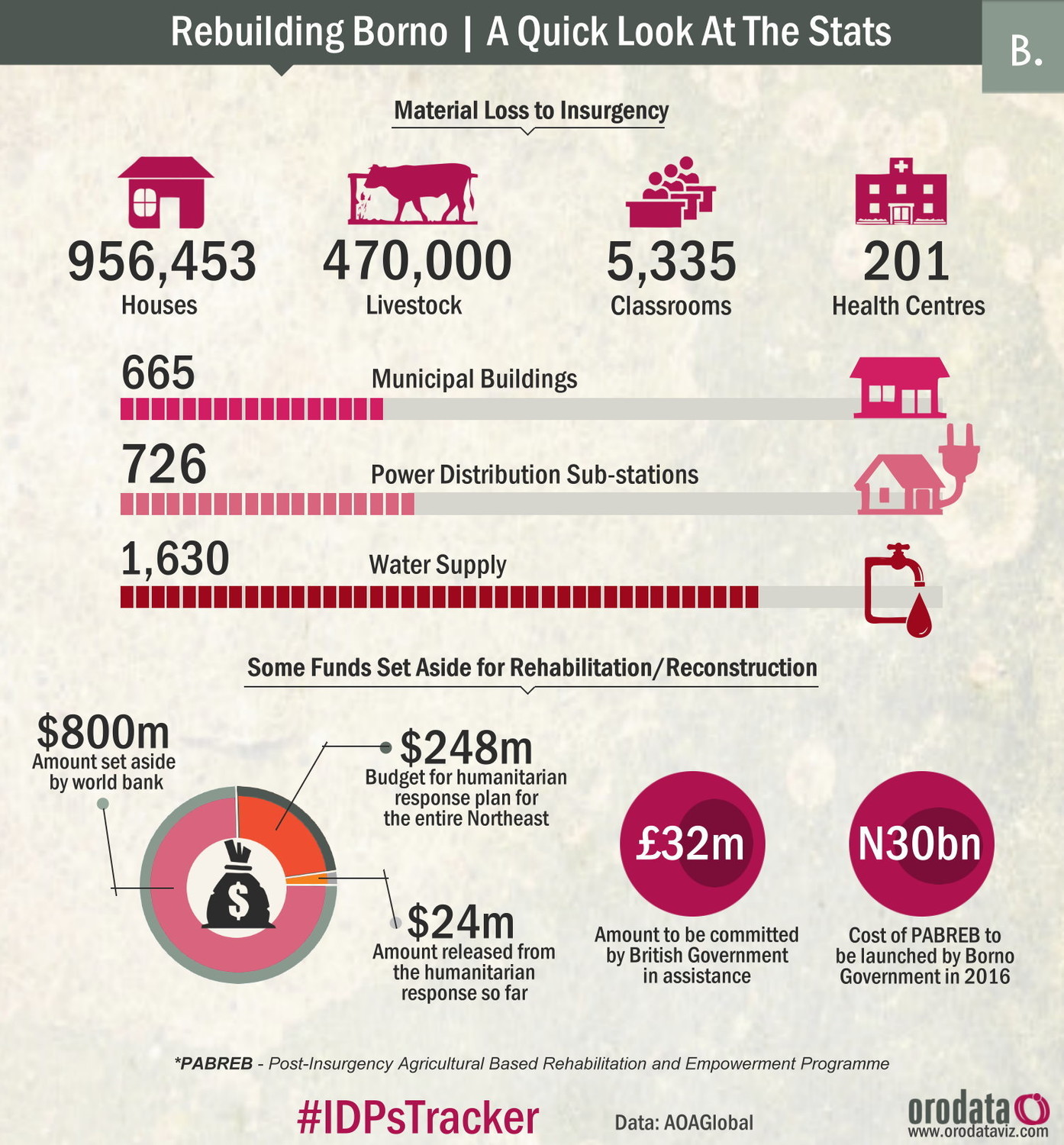 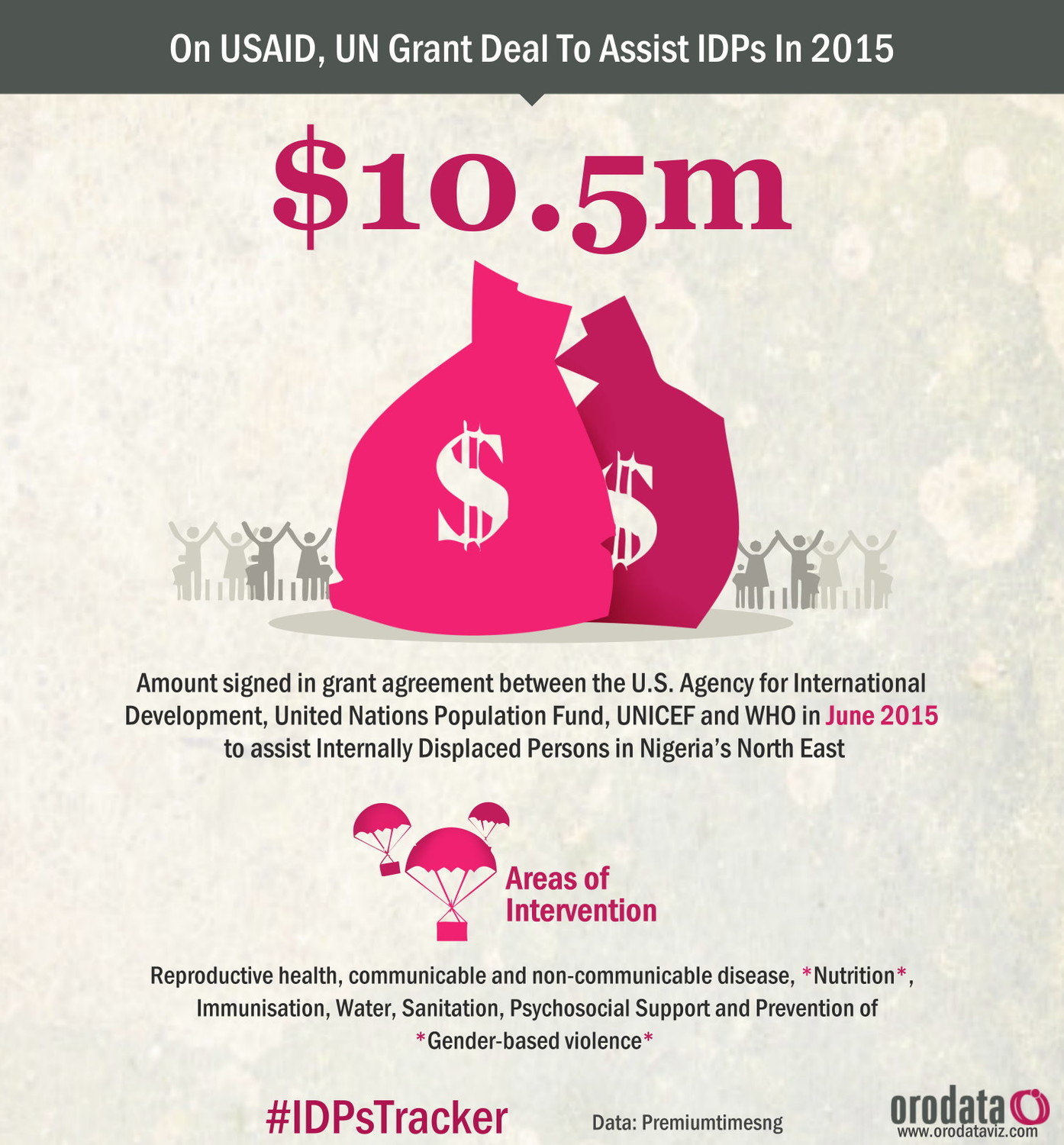 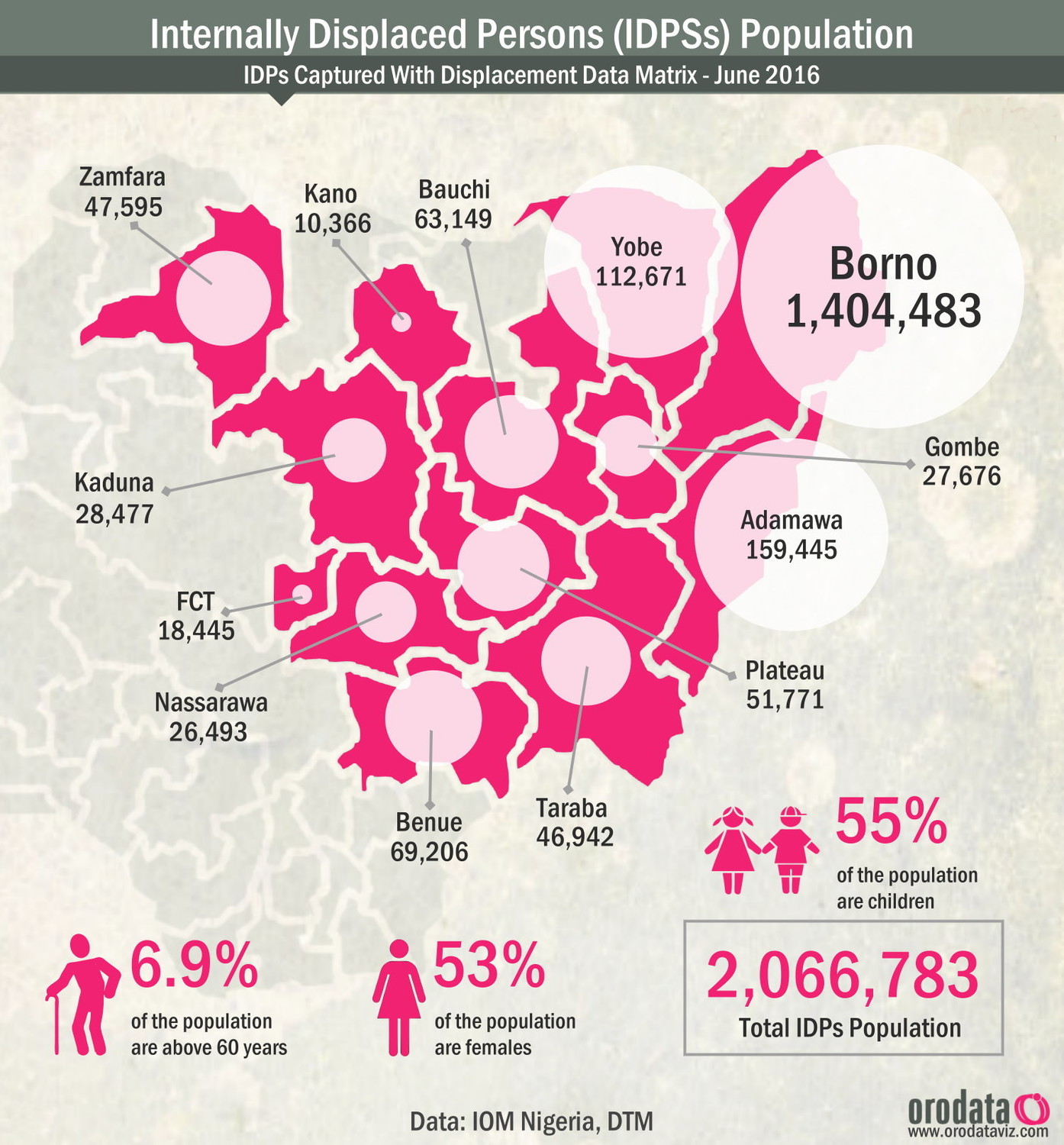 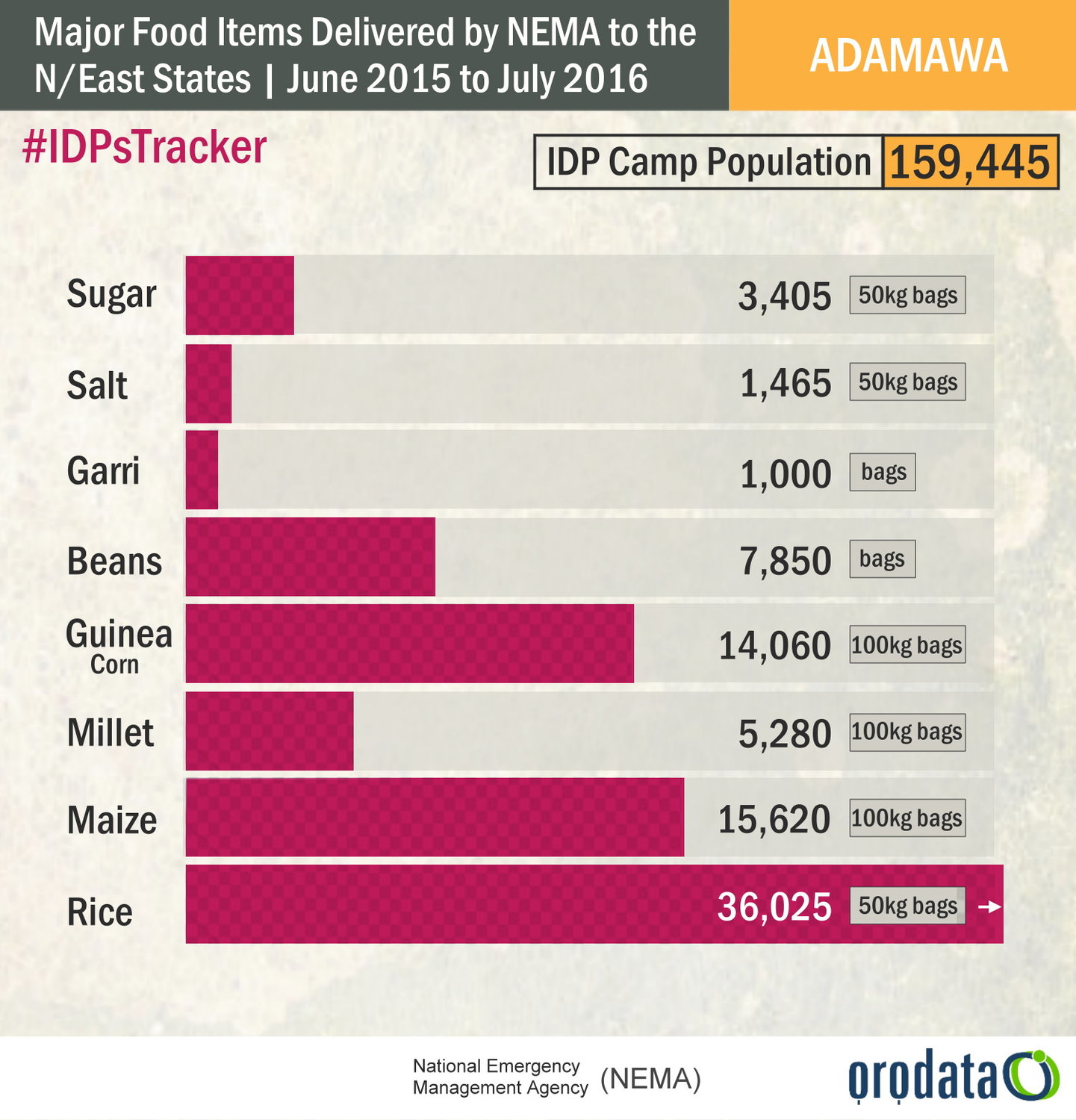 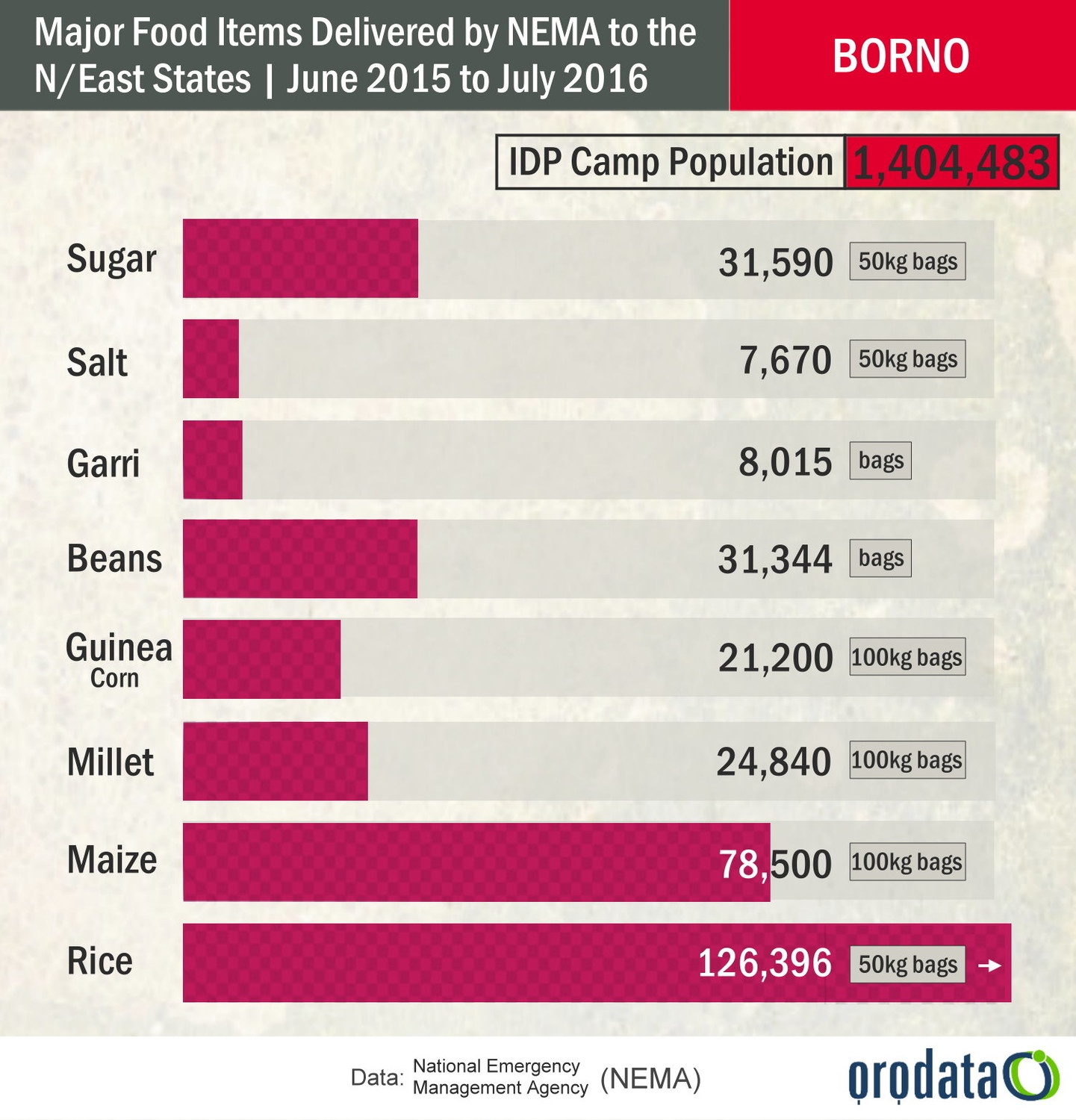 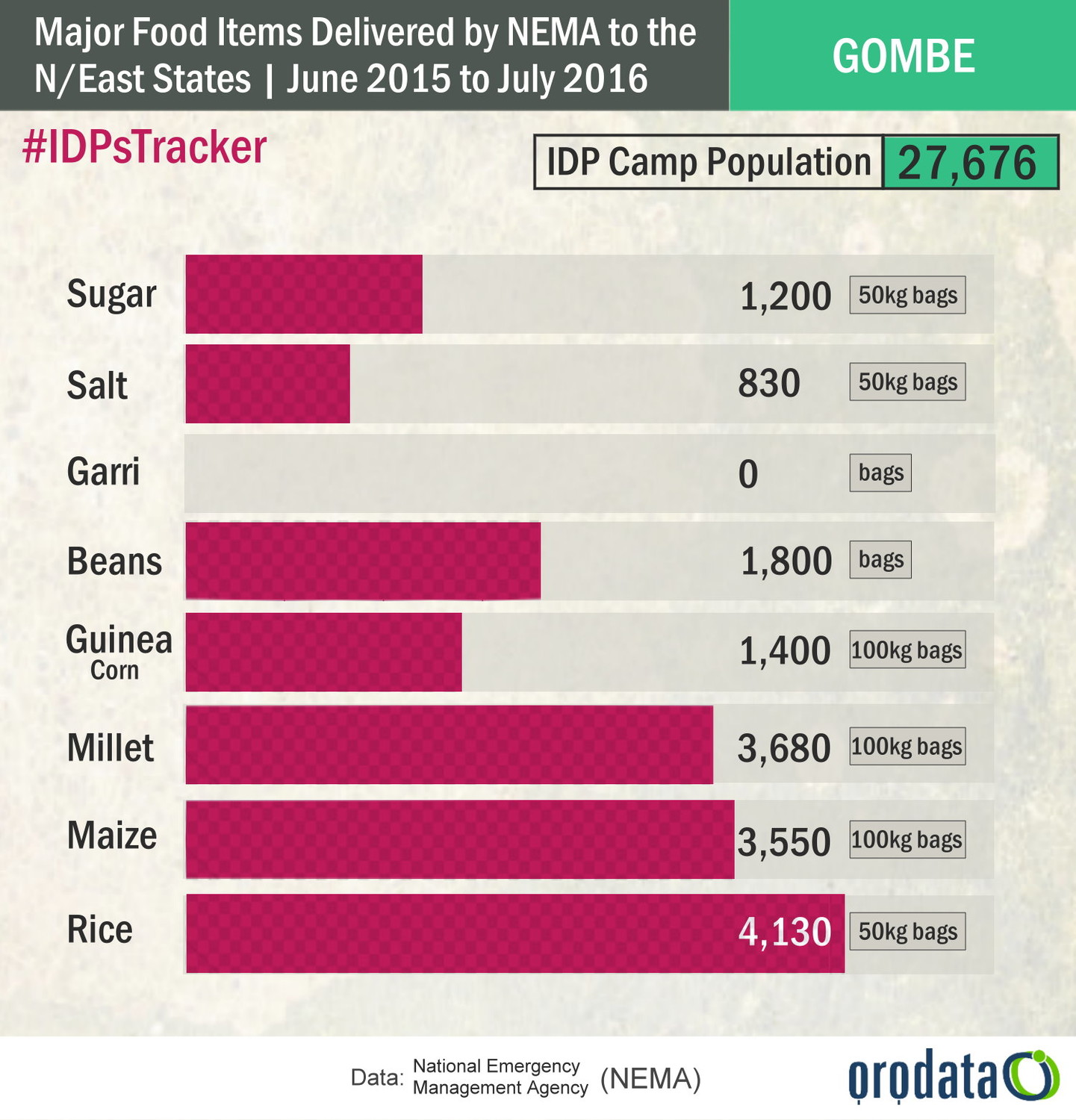 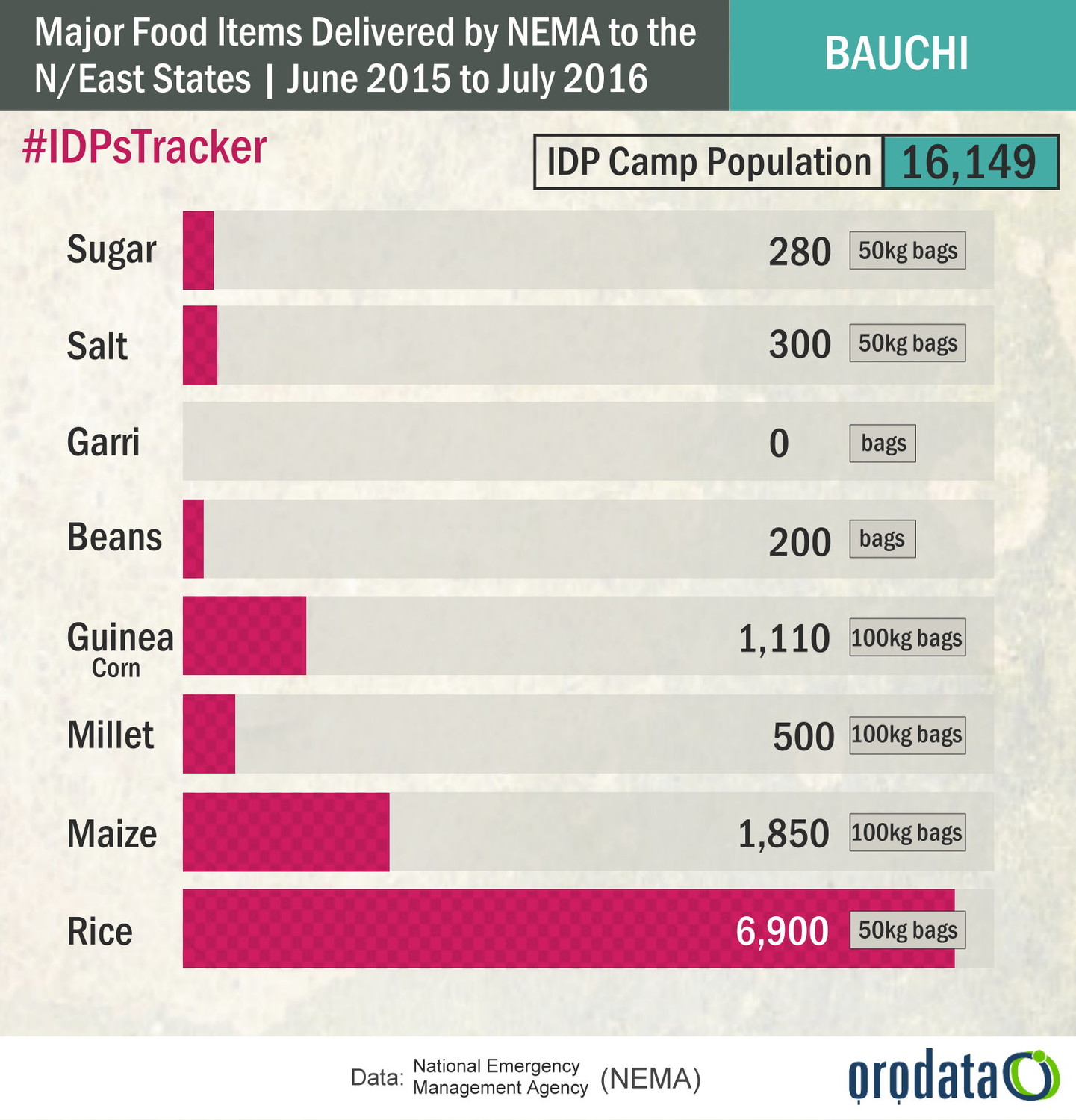 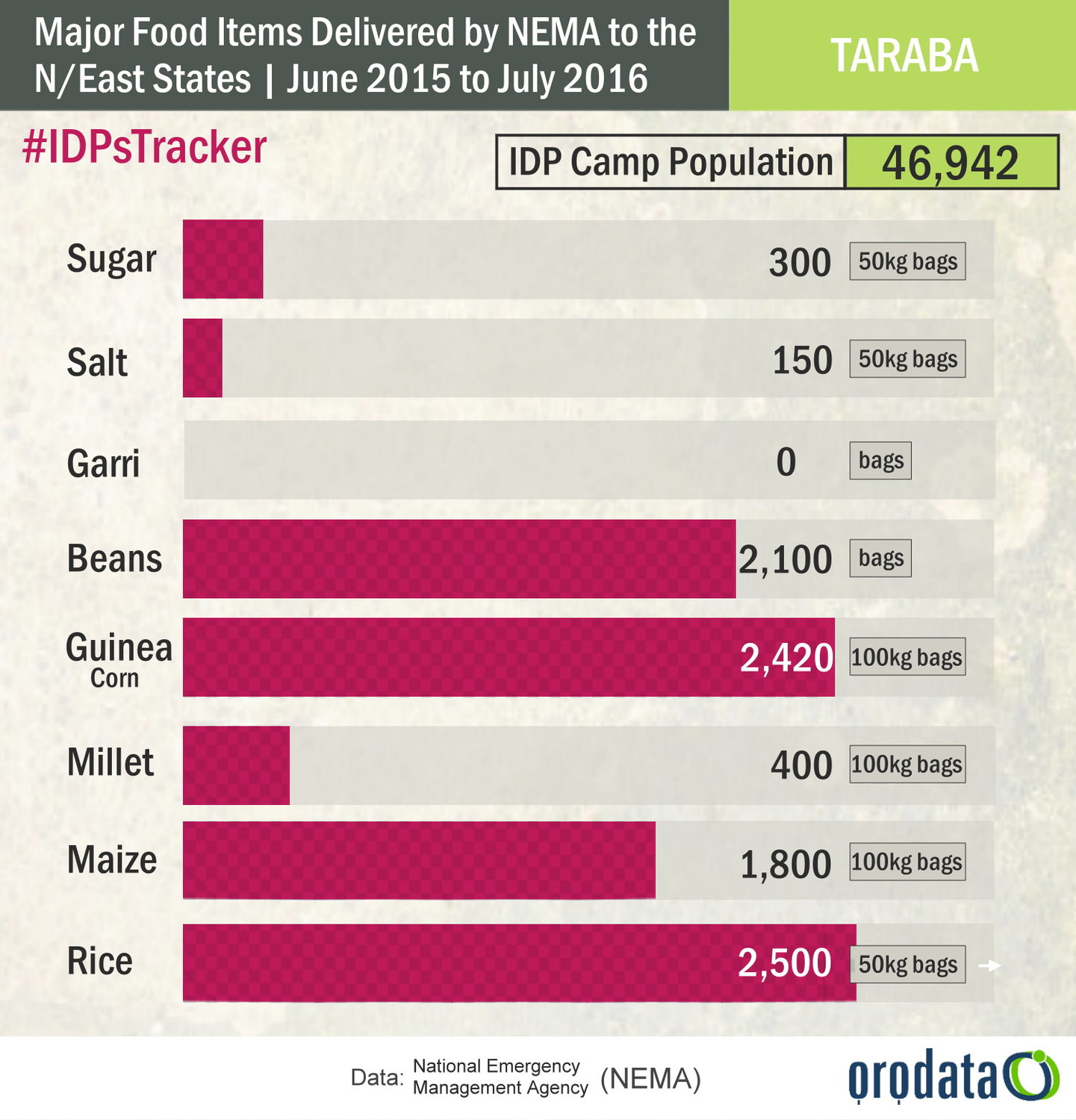 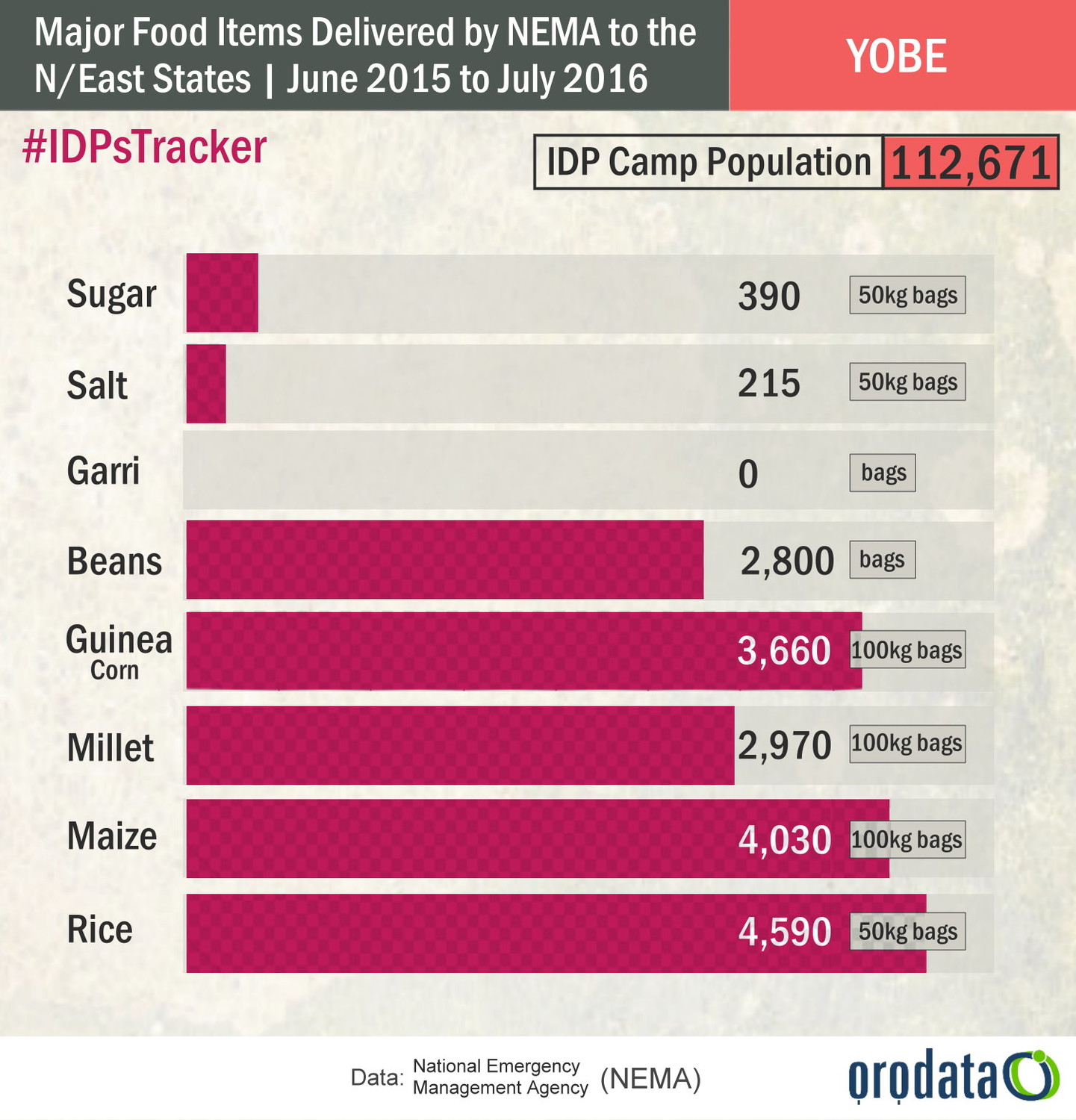 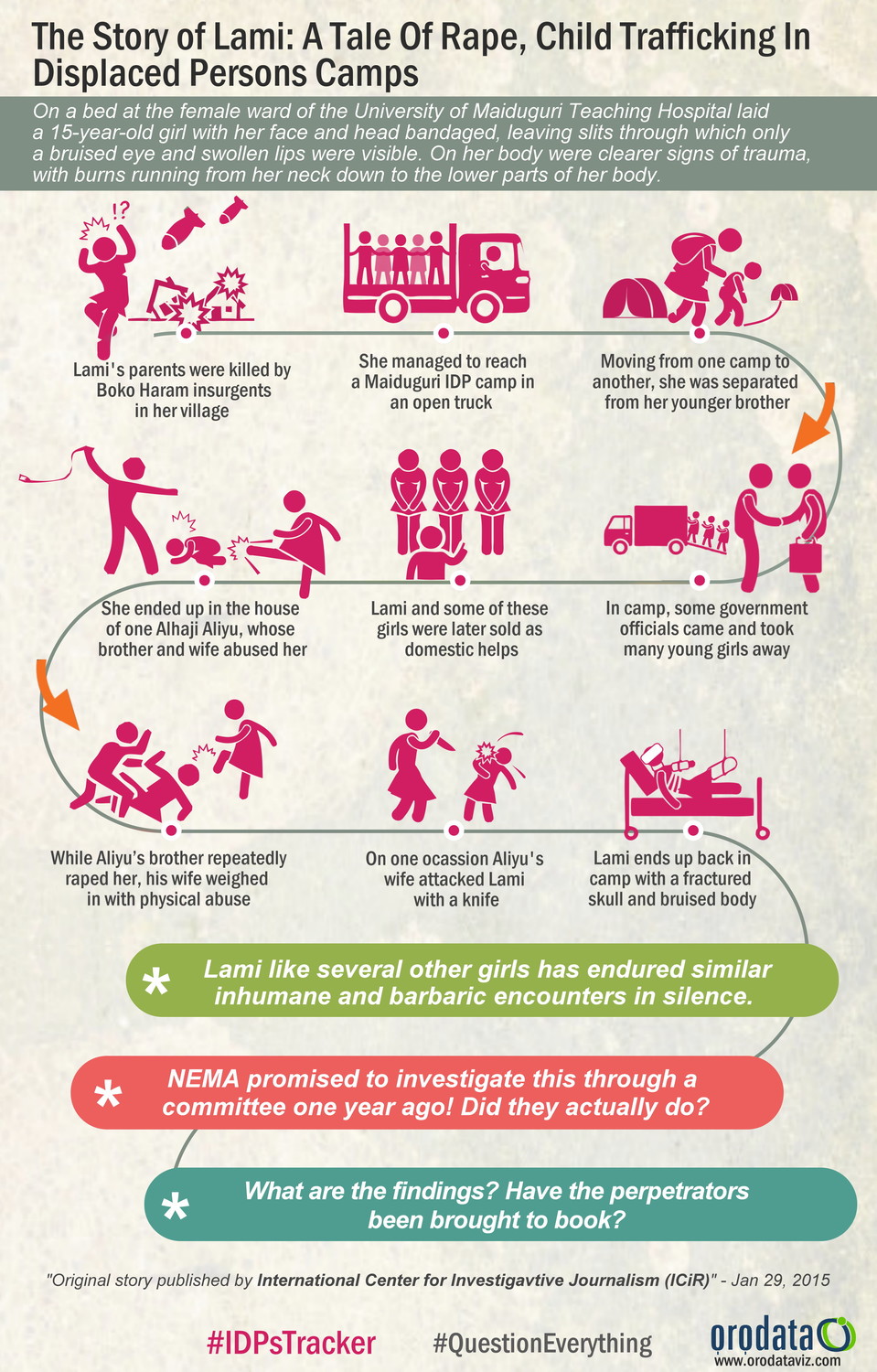 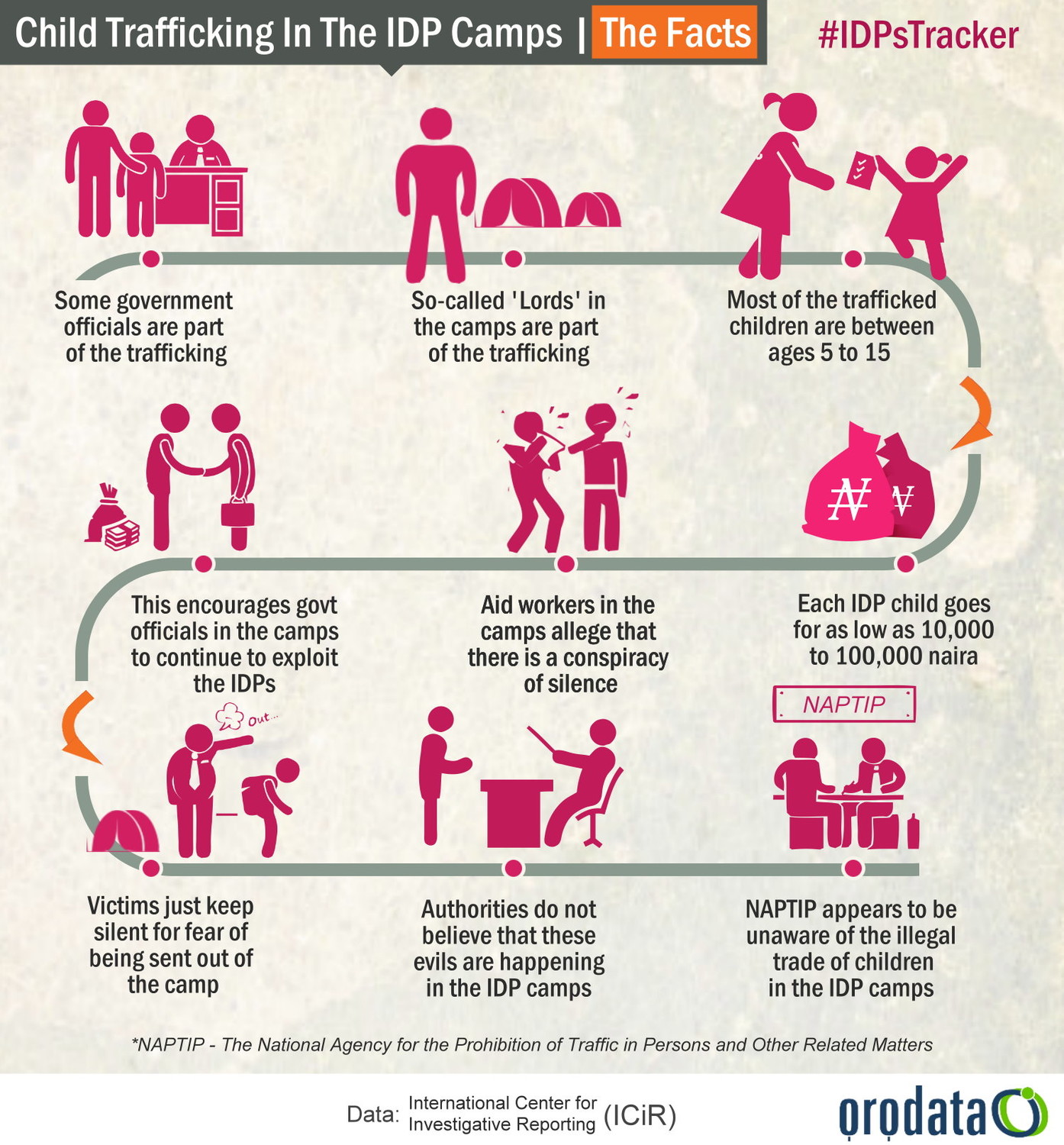 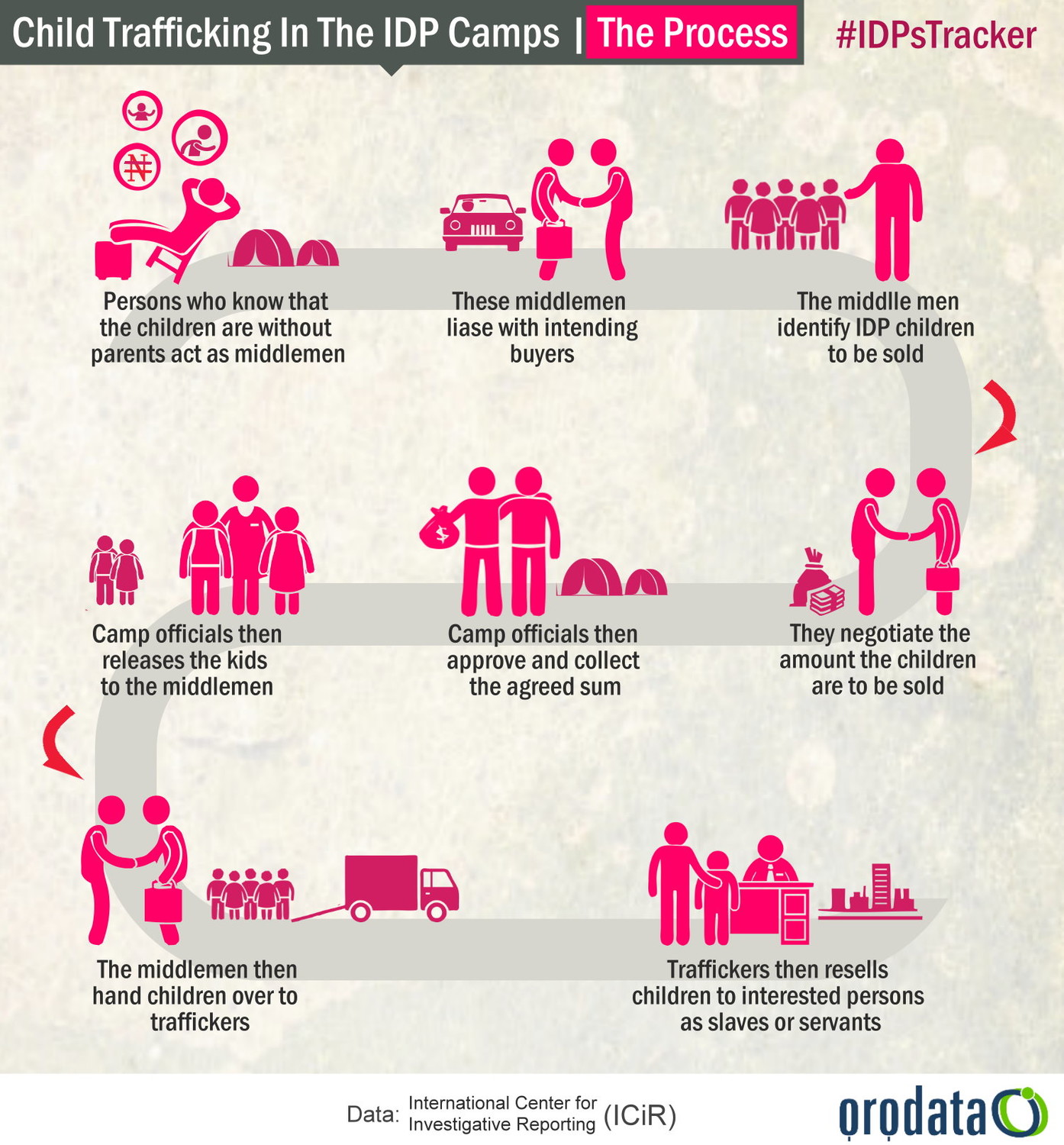 The benefits are enormous – there are implications for facilitating reduced resource wastages since information about how much food and items are needed in each camp, who is donating what, and where the gaps are so others can fill them. It also helps to track whether situations are getting better or worse.

So far, the IDPs Tracker by Orodata has released some informative infographics! But they have faced challenges getting accurate data, or getting data at all. Blaise was kind enough to talk about his work below:

What one thing do you want to achieve with your IDPs Tracker?

The Internally Displaced Persons crisis is one that needs to be tackled swiftly, properly and strategically. Now, the IDPs Tracker is such that it seeks to tackle the crisis methodologically towards sustainable development for the Internally Displaced Persons in Nigeria and revitalization of the North East. The old ways of doing things or rather the culture of ‘anyhowness’ does not cut it anymore. We have seen the results; growing insecurity, large cases of acute malnutrition and other diseases, large scale pilfering and diversion of IDP food items, child trafficking and sexual violence, death in large numbers.  This is not acceptable, and that is why IDPs Tracker was created to address these prevailing challenges leveraging Data Technology, Scientific Methodologies and Advocacy.

How do you get the data you need to populate the tracker?

Firstly, it was pertinent to understand the situation of things; so we accessed data and activity reports from many humanitarian organizations who have been engaged in IDP intervention work in over four years and more. For real-time data, we use a couple of open source platforms to gather and filter out activity, data or reports on the IDPs from several sources. For government data, we are using Freedom Of Information (FOI) requests – we have sent about two requests to National Emergency Management Agency (NEMA) in request for data related to donations of funds, relief items and food. We also inquired about detailed data on food distribution across all camps and the names of organizations partnering NEMA on Interventions. These Non-Governmental Organizations and several government agencies, we have approached with letters to share their data with us. Last week we sent an FOI request to Borno State government on how it shared the $1m food and farming grant given to them on behalf of IDPs by Gates foundation plus other information. All these will form part of the repository of the Tracker.

What has been most frustrating for you as you source for this data? And how do you think this can be overcome?

Access to data has been tough due to bureaucratic bottlenecks and organizational culture also known as the ‘it-is-the-usual-way-we-do-things’ syndrome. As an ordinary citizen, I know that making detailed IDP related information available is something government must prioritize and that it shouldn’t be hard for them to do. As a Civic Tech and Open Data advocate, I know that government has committed to the Open Government Partnership which seeks to make government itself more open, accountable, and responsive to citizens. That Information on government activities and decisions be open, comprehensive, timely freely available to the public and meets basic open data standards (e.g. raw data, machine readability). I also know that government is meant to totally honor the Freedom of Information (FOI) Act. As a technologist, I know building open data infrastructures and keeping them updated with relevant data for citizens to access is not rocket science. If government can build infrastructures as complex as bridges, why are these open data infrastructures hard to create? Why does government not freely publish data? Why do they give vague replies to FOI request of certain data by citizens and then proceed to publish some of the same data when organisations and citizens mount pressure on them through social media advocacy and citizen action or when they need to save their image?

Let me give you an example, last month we wrote to NEMA asking for data related to donor and relief items. The reply we got was not satisfactory; no detailed data. A week after that we proceeded to mount pressure via series of tweets on twitter. NEMA then messaged us saying that they collect and have data on relief distribution and many other operational processes but there exist numerous challenges to opening these data. They told us they were trying to overcome the challenges, so we asked that they send some of these data to us. Four days after that conversation we didn’t hear from NEMA nor receive any data until a day after the ‘food’ protest by IDPs on Kano-Maiduguri way. NEMA tweeted screen shots of data related to food items delivered to the 6 North East states between July 2015 and June 2016 as means of saving face and cushioning backlash from the public saying they weren’t doing enough. Why did they not send this data to us? Why wait for a protest before releasing data? While I am conscious of the ‘cultural’ challenges that exist in releasing information to the public, we know that if government is sincere about being transparent and accountable, they will find swift ways to surmount these issues.

People need to use your IDPs Tracker to get value from it. What are you doing to let people know that it’s available.

The ‘Tracker’ is of many parts. One is a web infrastructure, a repository of relevant data related to the Internally Displaced Persons, open, searchable and accessible to the public. The second is the ‘Advocacy’ part which uses interactive visualizations to make data simple and compelling while educating and engaging the public on discoveries, insights towards actionable decisions. The third part points out the merits of open data and engages institutions to make data more available. The first part which is a ‘lone’ portal to host these data is under development but we have an IDPs Tracker page on our website where the public can access these discoveries aside our social media pages for the mean time. The 2nd part – soon as we get new data, we visualize, publish it and make sure it goes viral like we did with our visual narratives on Child Trafficking in the IDP camps which was republished by several news outlets recently. Aside, we craft and publish bi-weekly pieces which re-introduces the project – its goals, what we have been up to, our challenges and what we are doing to surmount them.

What do you want to see happen in the short term and the long term to tackle the problems you see happening in IDPs camps now?

Firstly, cases of diversion of food items, child trafficking and related others must be investigated thoroughly, findings must be made public and perpetrators duly prosecuted. The importance of Data to addressing this challenge and Nigeria’s multidimensional challenges cannot be over emphasized. This is why a ‘culture’ shift and agency wide policy reforms are needed. Some of these challenges we see today in data are due to unavailability of technically skilled personnel and bureaucracy in government agencies – that has to be quickly addressed. Government must begin to be efficient in their activities especially that which relates to records keeping and data publishing towards transparency, accountability and citizen inclusion.

I can’t thank Blaise enough for his frankness and willingness to provide a solution that will facilitate real positive returns in terms of upholding the basic human rights of IDPs!