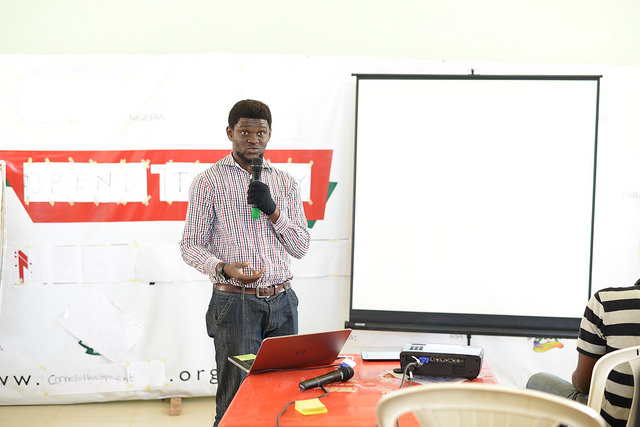 Connected Development [CODE]’s last event of every year is always a bar camp tagged “the Open Data Party (ODP) where participants from every part of the country come together to learn about Nigeria open data and share data skills. This year, the ODP was taken to the ancient Benin City, led by our School of Data Fellow and the team lead at Sabi Hub – Nkechi Okwuone, and Friday, December 11 and Saturday, December 12 in 2015 welcomed 117 social workers, civil servants, journalists, academics and other data enthusiast to the Law Lecture Theater Annexe of the Post Graduate School of the Benson Idahosa University in Edo State, with support from the Heinrich Boll Foundation, Indigo Trust, Open Knowledge Foundation, and Code for Africa. As at the time of writing this 61.1% of the participants rated the different aspect of the event as excellent, while 33% responded that it was good; 38.9% rated our facilitators as good, 38.9% rated them as excellent.

“So far, outside the United States and a few other major Western democracies, we have really seen open data being something happening at the national level. When we try to solve problems for citizens, problems are local. People need data to know about what is happening to them locally and often that is managed by sub-national governments” – These were the words of Katelyn Rogers of the Open Knowledge Foundation while giving opening remarks at the event. One important session introduced at this years ODP was the ideation session which allows participants to proffer solutions to a pressing waste management challenge in Benin City, a session that was introduced through the Code for Africa partnership.

The introduction to Data Pipelines that always opened sessions at the Open Data Party was immediately followed by three ignite talks to ignite participants on how organizations are using the data pipelines in working around data. The Open Data Companion (ODC) was presented by Osahon Okungbowa showing how they have compiled all open data portals around the world into one platform. Abdul Ganiyu Rufai from the Center for Information, Technology and Development (CITAD) explained how they aggregated hate speech for the just concluded general elections in Nigeria, while Blaise Aboh from Orodata shared how they are visualizing available Nigerian open data, government data, and creating simple information products that citizens can understand, in order to hold the government accountable.

As a follow up to the maiden Open Data Party in Abuja, and owing to feedback’s from last year event , this year’s event had nine hours of hands – on – training (skill share) embedded in the two days event. The hands – on workshops included Data Analysis using Google Spreadsheet and Microsoft Excel; Data Scraping using Tabula and import.io; Ground Truthing using Mobile apps such as FormHub and Textit; Visualizing data using maps with CartoDB and Open Street Maps; Visualizing data using infographics with specifics on infogr.am; and writing effective Freedom of information (FOI) letter. “The Data Analysis session is one of the most educative sessions I have attended amongst the sessions. “I have learnt where to get budget for environment especially ones related to my state, and how I can analyze it using Excel, I never knew this before coming” said Erdoo Anango of Kwasedoo Foundation International from Benue state.

Because the Open Data Party was meant for participants, and we really want them to participate, and make decisions on what they would like to teach, three hours was dedicated to an un – conference session on the second day which included a Follow The Money session where participants were exposed to how they can track funds meant for their local communities, and an opportunity for them as well to engage Follow The Money Nigeria as a state monitor. “We are aware of the Great Green Wall project, however it remains unclear how the funds budgeted for this have been spent, and we think we should be part of this team to track the funds in Yobe” explained Mohammed Garba Musa. Another intersesting session was the Funding your projects/Ideas and using Google Drive for Collaboration and Web Analytics.

From left: Hamzat Lawal of CODE, Nanso Jideofor of Reboot, Temi Adeoye of Code For Nigeria, Katelyn rogers of open knowledge, and Destiny Frederick of EcoFuture during a Panel Discussions on Open Data, Waste Management and Internet Governance

The Open Data Party was concluded by ideation session which had 14 participants presenting their ideas on how they can help to reduce waste in Benin City. The ideation participants presented ideas ranging from advocacy strategies, development of applications to help create situation awareness,development of applications that waste managers can also use in tracking waste in municipalities.Abdul Ganiyu Rufai who presented an idea of creating a platform for the Waste Management Board in Kano that can help them track where new dump-site are located, and also create awareness by sending SMS to Kano citizens was paired with Emmanuel Odianosen who presented the prototype of an app called Clyn that can be used in sending messages to Waste Managers, letting them know of waste available to pick up. They both won the ideation sessions, and will be supported by Connected Development [CODE] and Sabi Hub to develop their idea to reduce waste and improve waste management in Kano and Edo state.