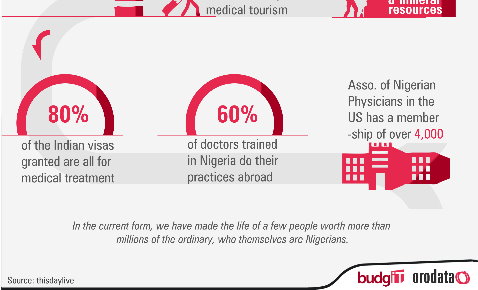 Nigerian health tourism and Nigerian medical tourism; The tale of the decrepitude of the Nigerian health sector is one now told by many pundits, health writers, professionals, and other activists; it is a fable that you all already know.

But this is not the tale I’m telling today, I want us to ask ourselves these questions, how did the we get here with this issue of Nigerian health tourism? Nigeria has become a place where our hospitals are only ‘world class’ on the pages of newspapers, a most shameful point where the country looses billions to other economies due to ‘medical tourism’ and not ashamed of it.

For as long as I can remember, the UK, US, Canada, has been destination for Nigerian health tourism, where ailing Nigerian go to get health treatment and pregnant Nigerian women who could afford the expenses go and deliver their babies. Nigerian health tourism seemed so normal for a trend which started in the 70s and 80s, until recent times when countries like Malaysia, China, Singapore and India became hot-spots too. Of over $500 million Nigeria loses to these economies, a whopping $260 million goes to India alone. Many times in the newspapers we read stories of white elephant projects; top notch hospitals built by serving governors who seem to prefer to be flown overseas rather than utilize institutions built by them, a serious case of a food seller refusing to eat out of the food he/she sells.

To illustrate my point, here are real examples of public officials embarking on nigerian health tourism. In September 2012, former Enugu State governor Sullivan Chime awarded the sum of N13.6 billion to Arab Contractors for the construction of a new Secretariat complex, while demolishing the existing one. Concerned statesmen spoke up, pointing out that it was needless and that there were more important things the resource could have gone into. In October of the same year he was reported to have been flown to a London hospital for medical treatment, the story according to Bellanaija was that he had cancer of the nose. Looking back, what was more important, a medical institution that could handle such rare cases of cancer or a Secretariat complex?

In April 2013, despite opposition by the Economic and Financial Crimes Commission, EFCC, a Federal High Court granted former governor of Enugu State, Chimaroke Nnamani leave to travel abroad on medical grounds. Documents presented to the court showed that the former governor was suffering from “chest pain, shortness of breath, cough and tiredness”, which could otherwise be treated in the 6 billion naira “project for posterity” Teaching Hospital he built in 2005/06, or could it not be?

The governor of Imo State, Rochas Okorocha in the same month and year, like Nnamani was flown abroad for medical treatment after sustaining ‘minor injuries on his forehead’ in a car accident. Should we assume that none of the specialist hospitals in his state couldn’t treat this injury? This also brings us to the question of the 27 world class general hospital presently under construction in 27 local governments in Imo state. Would the people be asking too much of the governor if they request that he begins to use one of the hospitals for treatment upon completion; after all they are world class?

In May this year, Goodswill Akpabio immediate past governor of Akwa Ibom state unveiled a 30 billion naira ‘world class’ hospital shortly before leaving office. This hospital Nigerians were told would attract medical tourism to the state due to its world-class specialist standards and ultra-modern medical facilities; “640 city scanners, digital mammography, endoscopy surgery, highly sophisticated intensive care units and medical gas plants with fully automated laboratories. Newspapers wrote, blogs blogged, many clapped not knowing that Mr Goodswill perhaps was ‘bo-bo-ing’ Nigerians. In September the ‘bo-bo’ was made manifest. The same Akpabio now a Senate Minority Leader was reported to have travelled abroad for medical treatment due to injuries sustained in a car crash after violating traffic rules. According to premiumtimes, the former governor ‘preferred’ to seek medical help overseas.

The Federal High Court in Lagos in July 2008, granted the then ex-governor and present governor of Ekiti State, Mr Ayodele Fayose leave to travel overseas for medical treatment while he was standing trial for a 51-count charge of money laundering. In a similar circumstance, the former governor of Bayelsa state, Timipre Sylva in December 2013 was also granted permission by an Abuja Federal High Court to travel to South Africa for medical treatment while facing a 6.5 billion naira fraud charge. Data seems to show that for one to be fit to stand trial for fraud cases brought against one’s person, one must go overseas and sip from the most addictive juice of wellness served at the canteens of their medical institutions.

We can go on and on about Nigerian health tourism, but you see, despite all these similar act of let-down by these individuals who were at some point charged with the cardinal responsibility of ensuring the health and wellness of their people, there was a very rare occasion whence it was proven that the Nigerian health sector still has very good hospitals with credible and well trained professionals. In December 2012, former governor of Kogi State Idris Wada was said to have rejected the option of being flown abroad for further treatment after undergoing what was described as inter-locking nail surgery on his thigh broken in the crash.

A Thisday article in Jan 2013 wrote that the Federal Government had concluded plans to place a ban on Nigerians seeking medical treatment that could be handled by some public and private health facilities in the country abroad. Two years after it seems like that ‘conclusion’ was not concluded because groups are still calling on the president to put an end to medical tourism. Last week the Nigerian Medical Association (NMA) urged President Muhammadu Buhari to ban all public office holders from seeking medical services overseas. It is said that a ban on medical tourism was one of the methods Chief Obafemi Awolowo leveraged as Premier of Western region, to make sure the children of political officeholders in Action Group (AG) and later, Unity Party of Nigeria (UPN) controlled states utilized the public schools health institutions.

So yes we keep going back and forth on this issue of Nigerian health tourism, the need for it to be banned, bla and bla but that steers us away from the real issue. Lack of medical information has always been the ‘Judas factor’, it’s the key problem. Our long loved tradition of going abroad for even the most treatable ailments has caused people lose faith in the system, most are even unaware that several complex issues can be treated here in Nigeria. Truth be told our medical advantage has also been poorly communicated. Why does nigerian health tourism thrive? What makes these foreign hospitals better than ours? Policy and data. In recent years, a growing number of governments from cities to states to regions have committed to opening up the vast repositories of data they hold across agencies and departments, and in many cases to collecting new kinds of data for public use. In the UK for example, departments, hospitals, providers, trusts, institutions and other agencies in particular have come under increasing pressure to allow greater access to healthcare data and information.

Over a decade ago, the Society for Cardio-thoracic Surgeons began publishing the results of surgeries done by individual physicians across the UK. Surgical outcomes improved rapidly, and a report by the Society stated that the marked, sustained, incremental improvement in the quality of care the surgical teams have achieved is directly associated with the process of recording, reporting and publishing outcomes at the level of the individual clinician.

Greater data accessibility has radically transformed the health sectors of these economies who have invested substantial resources (financial and intellectual) into developing comprehensive open health data strategies from whence incipient ecology of innovation, analysis and research began to emerge transforming the delivery and experience of their healthcare. This is why today our rich troop to these economies so as to enjoy the greater efficiency, innovation, and, perhaps better health outcomes there-in.